YCP Silicon Valley is thrilled to welcome Bishop Oscar Cantú to our March Executive Speaker Series! We are so excited that this event will be in person and outdoors at St. Williams church!

Bishop Cantú was ordained a bishop June 2, 2008, by Archbishop Jose Gomez (then archbishop of San Antonio), and was then appointed Titular Bishop of Dardano and Auxiliary Bishop of San Antonio. In 2013, Bishop Cantú was appointed bishop of the Diocese of Las Cruces, NM, and was installed as bishop on February 28, 2013, by The Most Reverend Michael J. Sheehan, Metropolitan Archbishop of Santa Fe, in the presence of The Most Reverend Carlo Maria Viganó, Apostolic Nuncio to the United States of America.

Bishop Cantú has served on several committees of the United States Conference of Catholic Bishops (USCCB), such as the Committee on Catholic Education, the Doctrine Committee, the Sub-Committee on Hispanic Affairs, and the Committee on International Justice and Peace. He chaired the Committee on International Justice and Peace from 2015 to 2017. In that role he visited churches in some of the most troubled areas of the Middle East, Africa, Latin America, and Asia to represent the U.S. bishops in showing solidarity with the local churches like those of South Sudan and the Democratic Republic of the Congo that are under great duress. He twice visited Iraq and Cuba. In the Middle East, he visited churches in Gaza, Jerusalem, Israel, and the West Bank, advocating on behalf of the two-state solution, the long-held position of the church. He spoke on behalf of the USCCB at the United Nations and in London in defense of the church's teaching on non-proliferation of nuclear weapons. He called for religious liberty in the Middle East, Indonesia, Malaysia, and India. He visited Japan in 2015 for the ceremonies marking the 70th anniversary of the atomic bombing of Nagasaki and Hiroshima. He was one of two delegates chosen by the bishops' conference to represent the USCCB at Pope Francis' visit to Mexico in February 2016. 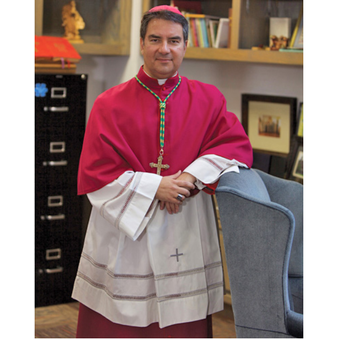